Martin Heidegger on the History of Metaphysics as Ontotheology

In its initial form this section will offer five pages:

1) Heidegger's contributions to the interpretation of the Greek word for Truth (Aletheia) as Unconcealment and to the history of his translation in Latin as Veritas;

2) An annotated bibliography of Heidegger's texts on Aletheia and a selection of critical studies;

3) Heidegger's contributions to the interpretation of the History of Metaphysics as Ontotheology;

4) An annotated bibliography of Heidegger's texts on the History of Metaphysics as Ontotheology and a selection of critical studies;

"Heidegger's way of understanding the originary phenomenon of truth is to "make clear the mode of being of the cognition itself." His starting point is a proposition that is not based on intuition. Someone says with his or her back to the wall: this picture hangs askew. The proposition embodies the claim to have discovered the picture (as a being) in the "how" (the mode) of its being. The proposition displays this "how" of being in language. In the attempt to verify the proposition by sensuous experience, the recognition, according to Heidegger, is directed only to the intended being (the picture) and not to the proposition. It is directed to the being itself (which is to be verified by perception) in its mode of uncoveredness (Entdeckt-heir), i.e., in its showing-itself. Confirmation (Bewährung) means this showing-itself of the being in the same way in which it is intended in the proposition.

A true proposition shows the being in its mode of uncoveredness. The phenomenon of "originary truth" does not have the character of correspondence. It is the ground of the concept of truth in the sense of correspondence and propositional truth. By unfolding the meaning of alétheia Heidegger shows us a more originary sense of truth as unconcealment (Unverborgenheit). He wants to show that this concept coincides with the first and originary concept of truth in Greek thinking. In this primary sense only the discovering human Dasein can be "true" while it is Being-discovering (Entdeckend-Sein). On the other hand, beings (Seiendes) that we can find in the world can only "be" in a secondary mode, i.e., as being-discovered (Entdecktsein). They can only make a claim to uncoveredness. Their fundament is the Being-discovering of the human Dasein. The being-true of a discovered being is only possible as being discovered by human Dasein as being-in-the-world.

The authentic Being of Dasein, the being-in-the truth, presupposes disclosedness (Erschlossenheit) of the world in states-of-mind (Befindlichkeiten), understanding, and discourse, i.e., the constitution of the being (Seinsverfassung) of human Dasein as thrownness (Geworfenheit) and project (Entwurf). The mode of being of Dasein is characterized equiprimordially (gleichursprünglich) by the possibility of both authenticity (being-in-the-truth) and the deficient mode (Verfallsform) of inauthenticity. In the mode of the "they" (das Man), of obstruction (Verstelltheit), of gossip (Gerede), Dasein is in untruth. Thus the being-in-the-world of human Dasein is determined at the same time by truth and untruth. We must always fight anew for the truth of Dasein (Being-discovering). Following Heidegger, the negative expression "a-létheia" expresses the fact that hiding itself is a main characteristic of Being. In the hiding-itself of Being, human Dasein is hidden for itself in the mode of untruth.

Heidegger wants to make evident how the transition from the originary concept of truth as alétheia to "correspondence" came about. He wants to make clear that correspondence is only a derived form of truth: in a proposition Being should be displayed in the mode of its uncoveredness. In the inauthentic forms of mere reproducing and hearsay, the proposition becomes itself something ready-to-hand (Zuhandenes). Thus we have to engage in the demonstration of the uncoveredness that is preserved in the proposition. In this way the relation between proposition and discovered being then itself becomes something present-at-hand (Vorhandenes) and can be understood as a correspondence of proposition and being (intellectus and res). The fact that we are used to disregarding the originary dimension of truth is an aspect of our forgetfulness of Being (Seinsvergessenheit).

The originary dimension of truth in human Dasein "is given" (gibt es) only as long as there is Dasein. All truth is relative to the being of Dasein. Thus the claim that there could be "eternal truth" seems to Heidegger to be "fantastic." Against the background of this relativity of truth to the being of Dasein, Heidegger asks anew: why must we presuppose that truth "is given"? His answer is that the possibility of truth (authenticity) and untruth (inauthenticity) belongs to the facticity of human Dasein. From the point of view of existential ontology, the being of human Dasein (its disclosedness) and truth are synonims." (pp. 711-712)

HEIDEGGER'S MAIN TEXTS ON THE History OF METAPHYSICS AS ONTOTHEOLOGY

"Ontotheology: Ontologie is the 'study [logos] of beings [onta]', Theologie the 'study of God [theos]'. Heidegger combines these Greek-derived words to form Onto-Theologie or Onto-Theo-Logie. The idea, but not the words, stem from Aristotle, whose 'first philosophy' considers both beings as such and the highest being (Kant und das Problem der Metaphysik, 220 / 150; Einleitung zu 'Was ist metaphysik?', 373 / 75). Thus ontotheology asks two distinct questions: 1. What are beings as such in general? 2. What is the highest being, and what is its nature? (Kant These über das Sein, 443). The questions are easily conflated in German, since Was ist das Seiende?', 'What are beings?', is literally 'What is the being?' or 'What is that which is?', which might be either question 1 or question 2. Sometimes Heidegger gives a different account of the two questions. Question 1 is 'about beings as such [nach dem Seienden als einem solchen]', question 2 is 'about beings as a whole [nach dem Seienden im Ganzen]' (Kant und das Problem der Metaphysik, 220 / 150). He imputes this conflation to his earlier self: in Was ist Metaphysik?, 'metaphysics is defined as the question about beings as such and as a whole [nach dem Seienden als solchem and im Ganzen]. The wholeness of this whole [Die Ganzheit dieses Ganzes] is the unity of beings, the ground that brings them forth and unifies them. To anyone who can read, this means: metaphysics is Onto-Theo-Logie' (Identität und Differenz, 51 / 54. Elsewhere he locates the confusion in the whole phrase das Ganze des Seienden als solchen, 'the whole of beings as such', which might mean: 1. 'the most general features of beings', or 2. 'the highest and thus divine being' (Einleitung zu 'Was ist metaphysik?, 373 / 275). (Aristotle is innocent of this confusion: his god is one being among others, not the whole of beings. But in Identität und Differenz Heidegger is dealing with Hegel, whose god is the overall structure of beings, not an individual being.) Biologie is the 'study' or 'science' of living creatures. But in OntoTheologie, -logie plays a grander role. Logos, from legein, 'to lay out, arrange, gather, say, etc.', means 'ground [Grund], letting (things) lie before (us) [Vorliegenlassen]', and also 'gathering [Versammlung], uniting' (Identität und Differenz, 54f. / 57; 67 / 69). Metaphysics does both. It gathers beings together to consider them 'as a whole'. It regards being as the 'ground' of beings: 'Ontology and theology are '-logies' because they get to the bottom [ergründen] of beings as such and ground [begründen] them as a whole [im Ganzen, lit. 'in the whole']' (Identität und Differenz, 56 / 59). Hence Hegel called metaphysics 'logic'; it is Onto-Theo-Logik.

How does God become a being, the highest entity, rather than simply Sein, 'being'? Being and beings are distinct but inseparable. Being 'grounds [gründet]' beings, and conversely beings 'beground [begründen]' being. But beings can beground being only in the form of a single supreme being, a cause that is causa sui, 'cause of itself': 'This is the appropriate name for the god of philosophy. Man cannot pray to this god, nor offer sacrifices to him. Man cannot fall to his knees in awe before the causa sui, nor dance and play music before this god' Identität und Differenz, 70 / 72). Heidegger thinks that 'god-less thinking', in rejecting this god of philosophy, is 'perhaps closer to the divine god' (Identität und Differenz, 71 / 72): 'the ontotheological character of metaphysics has become questionable for thinking, not on the basis of any atheism, but from the experience of a thinking which has seen in onto-theo-logy the still unthought unity of the essence of metaphysics' (Identität und Differenz, 51 / 55). In thinking about this unity, and about the DIFFERENCE that metaphysics discerns only hazily, Heidegger goes beyond metaphysics." (pp. 149-150) 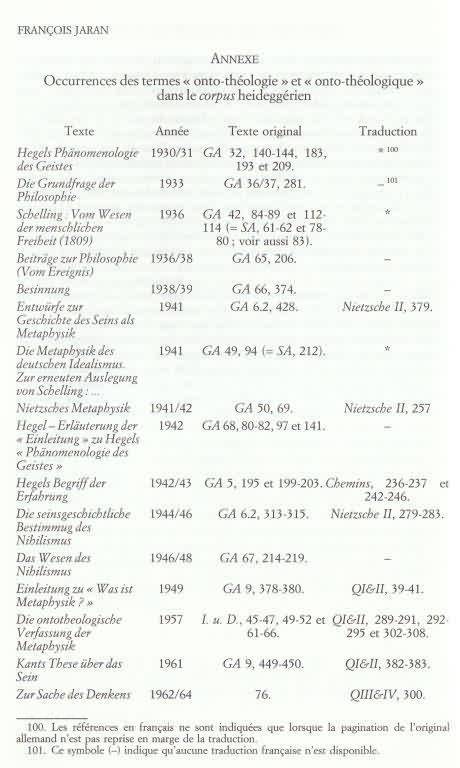 A Selected Bibliography on the History of Metaphysics as Ontotheology

A selected Bibliography on Heidegger's Interpretation of Aletheia as Unconcealment